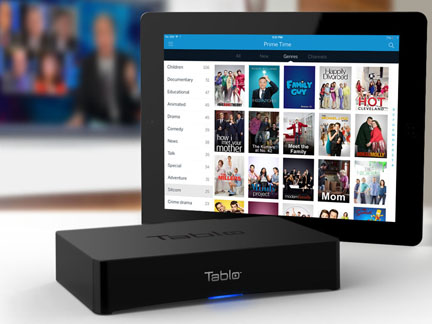 Cutting the cord from your cable provider doesn’t necessarily mean there is one solution to cover everything you watch. Ottawa-based Nuvyyo thinks it may have something that can help the cause in a big way with the Tablo, a set top box that can take free over-the-air HD broadcasts and stream and record them to mobile devices.

We had seen the Tablo in action at CES in Las Vegas in January, where it looked promising, melding together a physical connection to a digital antenna with pretty software that aggregated the available content. In a nutshell, a digital antenna connects directly into the back of the Tablo, along with an Ethernet or Wi-Fi connection to your home network. From there, the device can be set up using the free Tablo app on an iPad or Android tablet, or the browser-based one on a PC or Mac. The box uses the antenna to scan for all the free over-the-air channels it can pick up, and then downloads the TV guide data for those channels over the next two weeks. We were able to pick up CBC, CTV, CityTV, Global, along with U.S. networks, NBC, CBS, ABC and The CW. The type of antenna you use can make a big difference in how many channels you’re able to capture.

It also recognizes the various shows that air on these channels and groups them together for easier access. Tap on the one you want — or search for one — and you can see when it airs. You can also choose to record every episode (or only the newest episodes) that airs if you take the box’s functions a couple steps further. Plug in an external hard drive and the Tablo can format that drive to save recordings directly to it, so that you can readily get to them through the app later. Recording shows is part of the base options of the unit, but doing so well in advance and by entire season is a premium feature that is free for the first 30 days, but then becomes a subscription-based add-on, which we’ll dive into a little bit later.

We should note that you shouldn’t plug in a hard drive that already has content on it you don’t want to lose. By formatting the drive, Tablo effectively erases it, so you’d be advised to get a new one to work with the box. The box can also only read drives no larger than 2TB, and despite there being two USB ports in the back, only one at a time can be supported. Nuvyyo says its working on a firmware update to enable dual-drive support, but no specific timeframe has been confirmed. 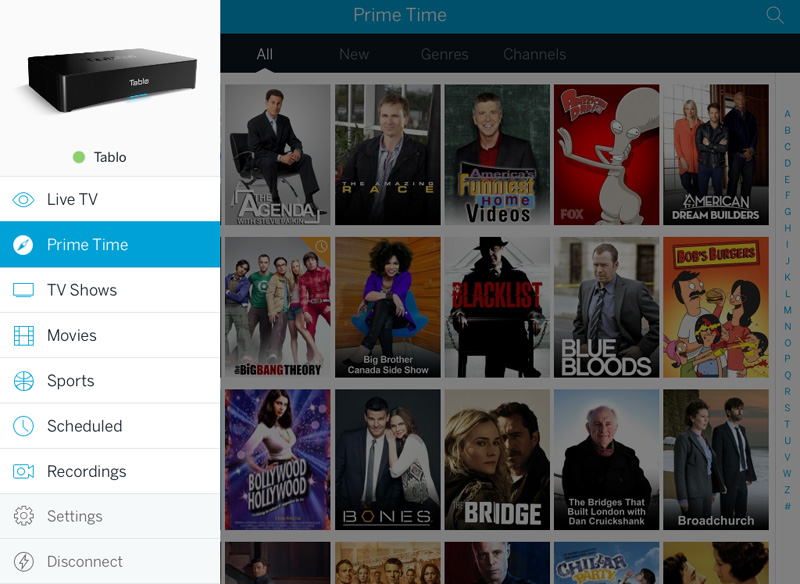 As far as watching content goes, this is where Tablo makes things very interesting. The box’s connection to your home network has the benefit of working with devices that just so happen to be cord-cutting favourites as well. Using an iPad, you could use AirPlay to beam the content over to a TV via the Apple TV. There is a Tablo channel on Roku that can work much the same way. And finally, you could also “cast” what you’re watching over to the TV that has a Google Chromecast dongle plugged in, though this is currently only available on the Android app.

If you have a PC or Mac running the browser-based Tablo interface, the old-school way of tethering it to your TV via an HDMI cable is another option.

That level of connectivity means neither the Tablo nor the digital antenna have to be anywhere near a TV, only that the two need to be in the best position. For example, you could have them set up near a bedroom window upstairs where the elevation is better suited to an antenna, but watch live or recorded shows in the living room or basement where one of the above-mentioned streamers might be set up. Of course, watching on a laptop or mobile device has no real restrictions, so lounging on the couch or in bed is perfectly fine. If you can manage to have it close to a window and plugged in directly to the router, that would be the best setup in order to avoid any potential latency.

Our experience with it was generally positive, with few hiccups and no real major drawbacks in performance. Setup was quite straightforward, thanks to the step-by-step prompts from the app (or browser), and finding what we wanted to watch or record was painless. We liked that we could watch a show live while grabbing a bite to eat in the kitchen, or tuning in to a recorded show before slumbering for the night. And most especially, we appreciated that we could place it away from the crowded home theatre setup and keep it where it could work best. Having the Tablo app nestled beside other video apps like Netflix, Crackle, NHL GameCenter, Snagfilms and others on our tablets rounded out a pretty nice package. 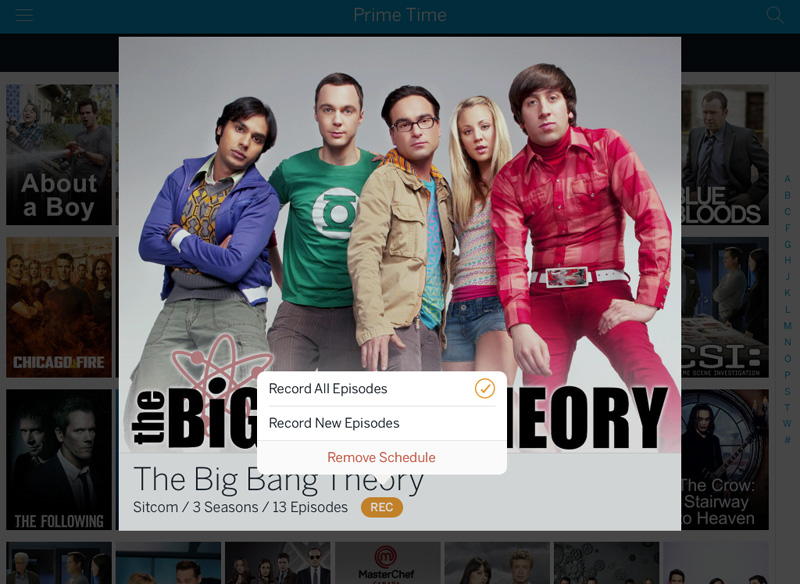 The one key caveat to all that is the noticeable drain on battery life. Watching an episode of Dragon’s Den on an iPad Mini, we noted that 23% of the charge was gone after it was done. Given that the Mini can manage well when streaming HD video, this seemed a bit excessive. With only a few other apps frozen and screen brightness at 50%, the quick loss was a bit baffling. The same thing happened when tested on an Android tablet, so we’re not sure if it’s a software-related issue or something else entirely.

While not a big deal, we preferred to try and go with a wired connection to the Tablo in order to maintain as fat a data pipe as possible. Even with the router nowhere near a window, we found alternatives using Powerline adapters or Wi-Fi extenders.

We’re also on the fence about the subscription pricing. After the free first month, it’s $4.99/month, $49.99/year or $149.99 for life. Subscribing gives you guide data 14 days in advance, plus all the cover art, info blurbs and the option to record all, or just the latest, episodes in a series. It also includes the lists for movies, sports and primetime TV and to sort everything using filters. And the final piece is Tablo Connect, which allows for remote access to view content outside of the home.

The perks the subscription provides are certainly worthwhile, but it’s over and above the $219.99 the box costs to begin with. Then there’s the residual cost of an external hard drive, which ranges depending on the size you need. The upfront cost of cord-cutting is usually not cheap, so Nuvyyo can be forgiven for what it’s trying to do, but adding up the dollars might be a little too rich for some. Of course, next to paying over $100/month for cable, it may not be such a bad deal after all.

Windows XP is being put to rest, forcing users to upgrade